We were curious to know what the best-selling vehicle is in every US state was, working under the assumption that there might be a wide variety: A Subaru Outback here, a Nissan Leaf there.

It turns out that American car-buying habits split into two obvious groups: Cars and small SUVs dominate in the most populous areas, and trucks dominate just about everywhere else. 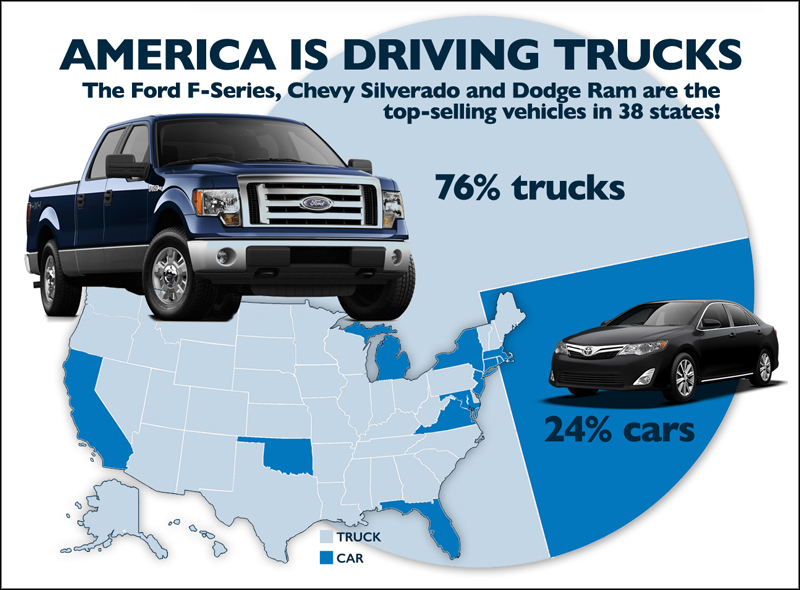 In fact, one single line of trucks, the Ford F-Series, is the best-selling vehicle in 34 states.

That the F-Series is so dominant is not a big surprise: It’s been America’s best-selling vehicle since President Reagan’s first term in office. In fact, in the first quarter of 2014, dealers sold nearly as many F-Series as the top two best-selling cars (the Camry and the Altima) combined.

It’s only in places where driving a truck might be less practical (California, along the Northeastern corridor) that cars and small SUVs win out as the best-selling vehicles.

Putting These Figures in Context

So, what gives? Why are trucks so popular? We don’t have hard data, but here are a few theories that, when taken together, paint a clearer pictures.

First, now that the NFL season has kicked off, pay attention to the commercials. You’re almost guaranteed to see a Ford, Chevy or Dodge truck advertised during each commercial break. Invariably, those trucks are marketed toward the American ideal of rugged, hard-working people.

Let’s not chalk all this up to marketing, though. For one thing, plenty of people simply enjoy the convenience of a truck. There was an interesting thread on Reddit earlier this year that asked why Americans love our trucks so much, and one commenter made some great points:

“I have two vehicles between my wife and I. I drive my truck to work and back. Any other trips we take her car, which is better on fuel. I may only use my truck bed a handful of times a year, but when I do I am glad I have it. I often have to pick up things up for my neighbor, who got rid of his pickup for a more family-friendly vehicle, and he has been looking for a good used pickup ever since.” [source]

We all have to haul stuff from time to time, and the one-car, one-truck arrangement makes a lot of sense for many families. Plus, enough Americans deal with snow every winter to warrant sufficient demand for 4×4 vehicles of some kind.

Perhaps the most important point, though, is there are simply fewer trucks in the market than there are SUVs and cars. Demand for trucks falls largely on three lines of vehicles, whereas demand for cars and SUVs is distributed among dozens of makes and models.

What Do Americans Drive? The Answer Might Surprise You was last modified: September 15th, 2014