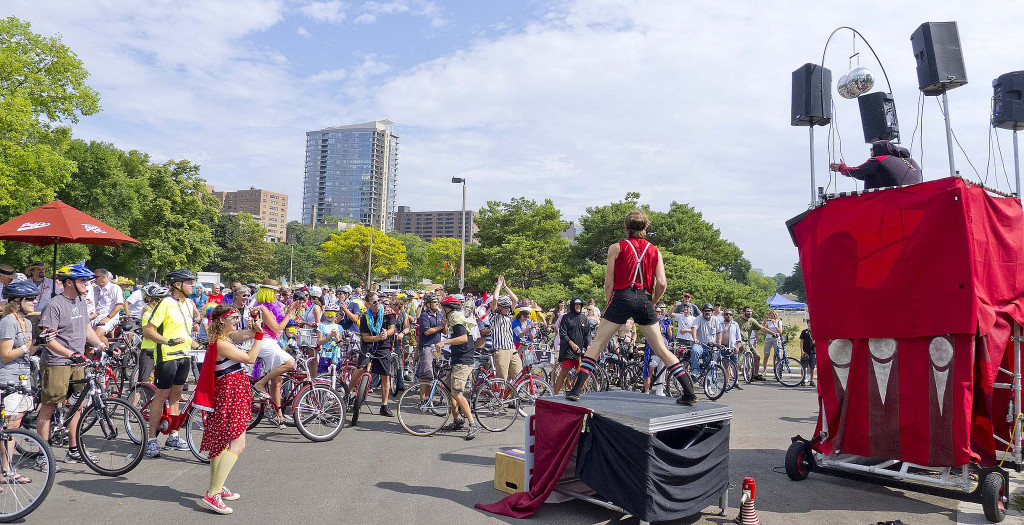 We’re already on the record as big supporters of Bike to Work Day and biking in general as an alternative means of getting around town. But biking doesn’t have to be limited to such, well, practical uses. Biking along America’s most scenic highways and trails with good company is a blast all on its own. If you need further proof, check out the list below of the 19 best group bike rides in America, most of which are organized to support a great cause. You’ll find everything from multi-day trips through the Utah desert to urban cruises in the nude (pro tip: invest in a comfortable saddle for that one).

The famous Los Angeles “party on wheels” has been rolling since 2004 with the purpose of experiencing the sights and sounds of the city from outside the bubbled confines of a car. With chapters now spanning multiple cities across the country, riders set out around 10 PM on a Friday night to cruise the city and escape the trappings of a modern urban life.

The San Jose Bike Party is a place to ride bikes, make friends and have a good time while enacting the change its members want to see in society. Existing as a medium through which to escape the suburban sprawl in favour of the South Bay breeze, the city streets and good company, this cycling group has evolved to strive for sustainability, environmental awareness and community transparency. Meeting the third Friday of every month at 8 PM, this social pedal party isn’t one to miss.

Sitting 100 feet below the surface in the abandoned mines of Louisville, Kentucky, this is the only underground bike park in the world. With 45 trails of jump lines, pump tracks, dual slalom, BMX, cross country and single-track racing spanning over 320,000 feet, this is a cycling destination for thrill seekers.

In support of the Wounded Warrior Project, the Soldier Ride is a four-day cycling event to help injured veterans and servicemembers. With specialist equipment provided for riders with disabilities, this international event hits Boston, Babylon, Key West and The Hamptons in 2015.

Tour de Fat is New Belgium Brewing’s moving celebration of the bicycle. The tour began in Fort Collins to increase promote cycling as a sustainable means of transport, and the event has since grown into a national affair. Bonus: each show features a costumed bike ride through the host city.

This four-day road-cycling event gives riders the chance to see Arches National Park, the Colorado River and Dead Horse Point — all done to support the fight against cancer. There are routes for cyclists of all levels, too.

With a dress code of “as bare as you dare,” the WNBR is truly a cycling event like no other (at least this side of Burning Man). Organizers encourage creative expression, too, such as body paint, costumes and portable sound systems. The ride itself is designed to call attention to the environmental benefits of cycling in the 21st Century. 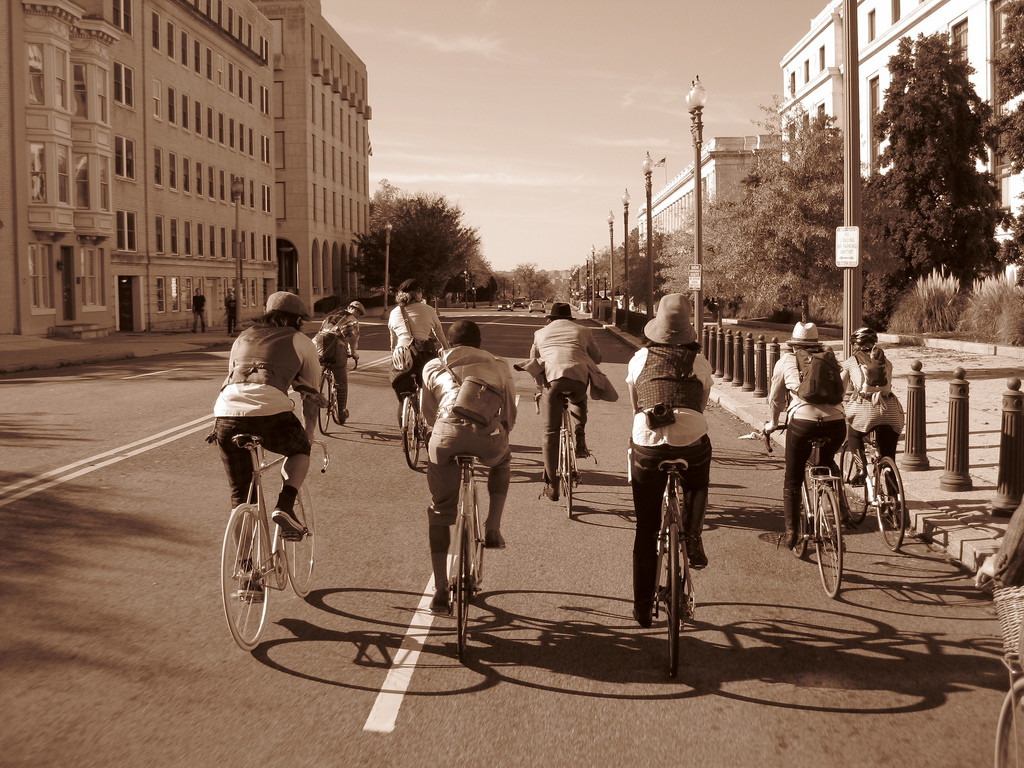 Set in downtown Tampa, the Gasparilla Criterium is a closed-course, fast-paced street bike race. The race itself is designed to be all-inclusive — event companies can register corporate teams, and organizers will provide bikes and helmets for participants. Proceeds help benefit On Bikes, a local charity that helps provide bikes for children who wouldn’t otherwise get one. Afterward, local craft beer and gourmet food is served.

The Outside Bike & Brew Festival combines handcrafted bikes with hand-brewed beers. Three concerts and four beer gardens over five days give festivalgoers ample time to explore the bike trails around Santa Fe by day and the breweries by night. Plus, you’ll find a variety of cycling classes, culinary cruises and pop-up shops.

L’Eroica was created by Giancarlo Brocci in 1997 out of admiration of the values of past cycling, and to preserve the last gravel roads in Tuscany. He wanted to reconnect his contemporary society with the heritage that inspired so much history, literature and culture — in his words, to “rediscover the beauty of fatigue and the taste of accomplishment.” And for the first time, Eroica took place in the USA in April 2015. Held in California, the event featured three routes during its weekend of festival entertainment.

Hailed as the largest free cycling event in the state of New York, the Tour de Bronx attracts almost 6,000 riders. Participants have a choice between a 25- or 40-mile course through the borough’s 61 neighborhoods before ending the day at the end-of-ride festival in the New York Botanical Garden. Proceeds from the ride go to Transportation Alternatives, which promotes better bicycling, walking and public transport in NYC.

A ride for the more serious cycling enthusiasts out there, Ride the Rockies is a 7-day, 465-mile, 41,000-foot climb through the Rocky Mountains. With a lottery to select the lucky few thousand participants, this is one of America’s most sought-after cycling events.

This self-proclaimed “Best Bike Ride in America” offers a combination of scenery, fun and philanthropy. More than 2,000 cyclists strap a tent to their handlebars and explore the back roads of this beautiful state, stopping for massages, microbrews, and local wines and cheeses. There is a different route each year, and you can choose between a 2- or 7-day ride. Proceeds go toward the Cycle Oregon Fund. 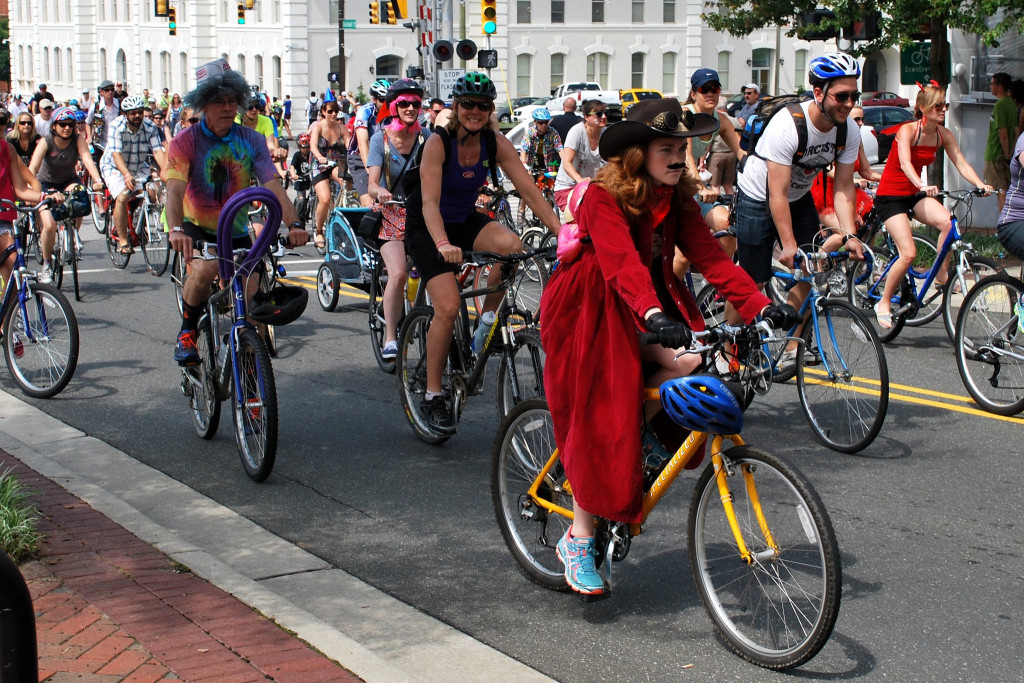 If you’re not content with a flight to get you across the country, then here is your chance to pedal 3,851 miles from San Francisco to Portsmouth, New Hampshire, over 52 days. This is the ultimate in fully supported, long-distance cycling events.

This three-day, 375-mile circumnavigation of the island attracts some intense endurance athletes. The ride takes place in January 2016, so it’s a great way for all you cyclists who get snowed in during the winter to get out and ride in the sun.

Bikes Not Bombs organizes a scenic ride through the greater Boston area each year to raise funds for programs that promote social and community change. “Each year, we collect roughly 6,000 used bicycles and tons of used parts from our supporters around Greater Boston and New England,” organizers write. “We ship most of these bikes overseas to economic development projects through our International Programs in Africa, Latin America, and the Caribbean.” Other bikes remain in-country so that children can have a bike and those in need can get access to reliable transportation.

The Bike Music Festival is the world’s largest 100% bicycle-powered music festival. This includes 15 bands and a 14,000-watt PA system that roams around the city, making the festival a mobile experience. So, grab your bike to follow along, or just meet up at one of the festival’s various stops.

The Hotter N’ Hell Hundred is one of America’s biggest and oldest cycling events. It’s so called because it takes place around Wichita Falls, Texas, during the dog days of August — when average daytime highs hover around 95 degrees.

Here is another race that’s been moved from Italy to America. The world-famous long-distance race returns to New York in May 2016, but there are a few South American and European races in the meantime if you cannot wait.