Nissan conveniently dropped its Datsun brand in America two years after our owner, Bill Bender, opened Independent Datsun here in Boulder, CO. So, we updated our shop’s name to Independent Motors and Nissan doubled down on the styling and performance that earned the automaker a niche following in the ’70s and ’80s. And we’ve been doing Nissan Repair as needed ever since.

The ’80s were a decade of growth for both our shop and Nissan. We brought on some extremely skilled master automotive technicians, and Nissan went full-bore with its R&D unit. The result? In 1989, Nissan debuted the famous R32 Skyline in Japan and introduced its brand-new luxury Infiniti car brand in the United States.

The Infiniti is Born

“The story of Infiniti begins with the formation of a top-secret task force within Nissan [in 1985],” the company says. “Its mission: to create a new performance luxury brand to compete with the big U.S. and European luxury brands in the American market. Our expansive vision embraces  a new luxury automobile ethic that includes not just vehicles, but the entire purchase and ownership process.”

So, as Infiniti embarked on this new way of imagining the relationship between customer and automaker, we were busy trying to bring that same ethic to community auto repair. And more than a quarter century later, we still see in the modern Infiniti the things we loved in those old Datsun two-seaters.

Here are four things you should know about Infiniti vehicles

1. They Inherited Much of Nissan’s Performance Pedigree — But Only After a Few False Starts

The first Infinitis sold in the US — the Q45 and the M30 — underwhelmed many car buyers. All throughout the ’90s, Infiniti tried to tweak things like features, design and owners’ clubs, but it struggled to keep pace with Lexus and Acura (to the point that Nissan thought about shutting Infiniti down during the Japanese financial crisis).

“By the year 2000, due to lackluster sales figures as well as problems with the Japanese asset price bubble was causing Nissan take a look at abolishing the Infiniti marque,” Gearheads.org says. “Though the company was spared it was decided that it should focus more on producing more powerful luxury sports cars instead of just rebadged Nissan vehicles.”

That re-focus on performance changed everything. In the early-2000s, the company struck gold with its G35 coupe, Motor Trend’s 2003 Car of the Year. That helped propel sales: In 2003, Infiniti sold nearly 42,000 more vehicles than the year before.

Infiniti’s current fleet of vehicles are mostly built on Nissan’s FM platform, which places the center of the engine’s mass behind the front wheels for better weight distribution. That fleet currently features seven vehicles: 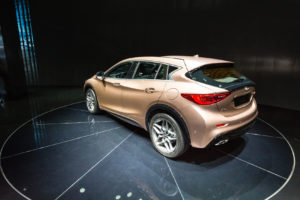 2. The Company Puts a Ton of Effort Into the Design

Spirited performance and sleek styling have become hallmarks of the Infiniti brand.

“When I was brought in, there were certain things building,” Infiniti Executive Design Director Alfonso Albaisa tells Car & Driver about his arrival at the company in 2012. “Shiro [Nakamura, Infiniti’s chief creative officer] didn’t want radical change so much as he wanted a deepening; to make it obvious what we wanted to do.

“… When I came in about four years ago, engineering was going through a phase where they wanted to identify things that they could do which would be best in class. The body stamping, the sense of carrozzeria, was one of the things they put up at the very top. Other brands are doing sharpness; it’s nothing new. We went a more romantic route — it’s not just the sharpness, it’s the fluidity of metal. This was a source of deep inspiration to us as designers.”

What’s more, the company has put a great deal of work into improving safety technology in the last 15 years:

Cars as safe, stylish and technologically advanced  as your Infiniti still need to be maintained and serviced from time to time. That’s why we have master mechanics on our staff that specialize in Infiniti repair and maintenance. Be it an Infinity car, truck or SUV, we use state-of-the art diagnostics tools that allow us to do preventative maintenance. We’ll identify any would be or even minor repair issues while they still minor and easily fixed.

Call Independent Motors today at (303) 449-8949 for the best in Infinite repair and auto repair in Boulder, CO. You’ll be glad you did!